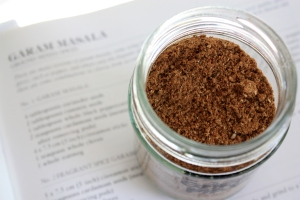 Spices are something as a cook that used to intimidate me.  I’m still not 100% certain when it comes to using them intuitively yet, but I’m trying to learn and take risks.

One thing I know is that blending your own mixes is always a step above buying them premixed, and the same goes for grinding them from seed.  I don’t honestly have to go any further than this mix to prove that to myself as the fragrance and flavour was far superior.

My tips for making this blend would be to make sure that you use a spice or coffee grinder.  My first attempts using the food processor may have a left a small mark on mine which was a tad upsetting.  It also couldn’t handle the cinnamon bark.  The second tip is to break the cinnamon up and then grind this first before adding your other spices.

In spite of being a bit of work, you’ll end up with a nice jar full of spices from this recipe which is well worth the effort for the curries you’ll want to make in your kitchen afterwards.  Mine instantly went into an egg curry I made from Charmaine Solomon’s The Complete Asian Cookbook and it was awesome.  Stay tuned for that recipe.

In a small fry pan dry roast each of the seeds separately except the nutmeg.  I would recommend breaking the cinnamon up a little if you can.  As each one starts to turn fragrant remove from the heat and place on a plate to cool.  After roasting the cardamom discard the pods and use only the seeds.

Place the cinnamon into a spice/coffee grinder and blitz.  Once the cinnamon is in a powder then add the remaining spices leaving out the nutmeg and grind until a well combined powder.

Finally grate your nutmeg into the blend using a microplane and mix.

This mixture will keep in an air tight glass jar for a month or so.